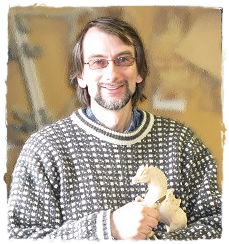 Arne Mørkve, b. 1964 in Voss, is Sjur's son, and started woodcarving in 1989. He has no formal education in the trade, but has been learning by doing. The knowledge and experience of the others, especially his father, has been crucial to his development as a woodcarver.
From the beginning he has made his own pieces, and over the years he has accumulated a variety of products. Many of his pieces are of animals, both from farmlife and wildlife, and some of people.
Other products are drinking cups, dippers, and nutcrackers.
He has also taken on the task of carving pieces from his father's collection. 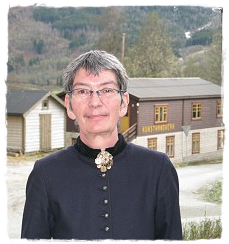 Bergfrid Mørkve, b. 1955 in Voss.
Sjur's daughter. She went to art school at Voss for two years, where she learnt ornamental carving. She started as a woodcarver in the late 1980's when she took part in the production of nutcrackers; carving, painting and doing the last "finish".

She has gradually developed a range of products herself, and is no longer involved in the production of nutcrackers. Bergfrid mainly carves human sculptures: caricatures, Norwegian "hillbillies", human heads made as corks for winebottles, etc.
She has also done some restoration work on old woodcarvings.

You can find examples of her work here. 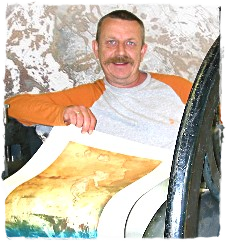 Geir Nymark, b. 1956 in Bergen, went to art school at Voss for two years, where he met Bergfrid. He graduated in 1981. With Sjur's guidance, he took up the production of nutcrackers.
The nutcrackers were during many years his main product. He developed the traditional model, and found his own style. In addition he made sculptures, both of people and of animals, and also traditional Norwegian style ale bowls with a new design.
Since around 1990 his work turned gradually towards graphics artwork, mainly in the form of etchings. Today he is a well established graphics artist, with a variety of motives. He has had several exhibitions, and his work is found in art galleries around the country. From 2003 he has been working fulltime with etchings at his own studio in Voss.

You will find more information about Geir and his work on his webpage: www.geirnymark.no and on Facebook: Geir Nymark Grafikk 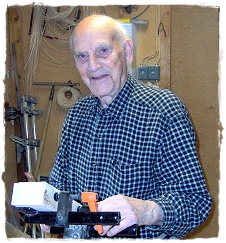 Sjur Mørkve, 1917-2007, was born in Voss, and started carving sculptures already as a young boy. He often visited his neighbor, a well known woodcarver in the valley, Styrk Hirth. He learnt much about ornamental carving in the Norwegian "dragon style" from him. And there he also got his first real carving tools, and guidance in how to carve nutcrackers, among other things.
During the days he herded the goats, and when he had time to spare, he liked to carve. He had living models all around him, and it was here he carved his first goat sculpture, 12 years old. One of the motives which he continued carving all his life.

From 1953-55 he went to art school to learn more about classical ornamental carving. After graduating he started his own workshop, and since then woodcarving was his profession. When he first started, nutcrackers was his main product. Gradually other things became more popular, like the traditional pack-horses and the goats. Through the years many people got to know his work, and at the end of his career, his pieces was more popular than ever.

You can see photos of some of his carvings here. 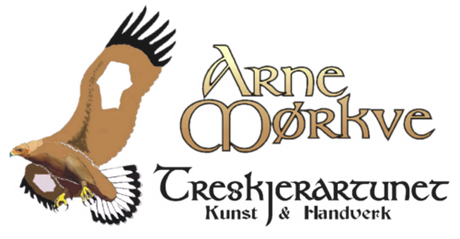